After the mist and clouds over Lake Ontario, the sky brightened, the clouds broke and a very weak sun eventually broke through as we made our way north through Bruce Peninsula.

The contrast between USA and Canada is marked. Canada (so far) could be described as neater, more orderly, substantially built homes and tended gardens. The landscape so similar to England we had to pinch ourselves at times. Agriculture is obviously the main use of the lands, huge swathes of vineyards advertising ice wine, a strange anomaly where they pick the grapes when frozen to make the wine.

After a long and uneventful drive we made an overnight stop at Owen Sound. Small town, nothing out of the ordinary but very welcoming.

Just about everyone we passed had a smile and greeting for us. The number of wellbeing centres around town may contribute to everyone’s attitude!

We did try to find the Inglis Falls, however we were obviously not looking in the right places, our usual sources of local information don’t seem to open until July.

After an entertaining breakfast with a group of mature women from a church group, who obviously don’t get out very often and could just as easily been a group of teenagers based on their behaviour! We headed north to the tip of the peninsula to the village of Tobermory for the Chi-Cheemaun ferry.

Tobermory is a small hamlet from where various boat tours sail to the small islands,

most popular seeming to be Flowerpot Island with its flowerpot shaped rock.

Timing is everything on a road trip and we were fortunate that the ferry had started its 2019 season only the day before.

Crossing Lake Huron to South Baymouth on Manitoulin Island it felt like we were at sea, so large is the lake, with turquoise water at the shores.

The clear skies were overtaken by clouds as the sun set so no viewing of the Dark Skies Preserve tonight.

The clouds had not lifted by morning as we set of for a walk along the Cup and Saucer Adventure Trail.

Finding it easily we set off along the trail

but 10 minutes into the trail it became a bog, so we had no choice but to turn back. Driving further we saw signs to say the trail was closed, so probably as well we were turned back! 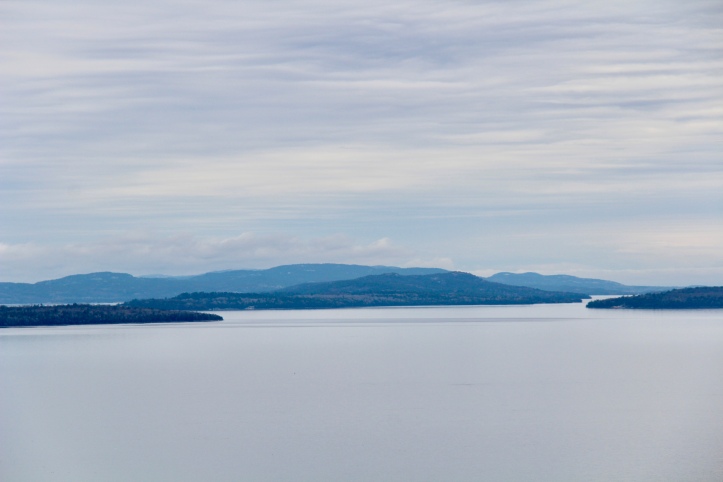 Driving round the small roads of the island was interesting, 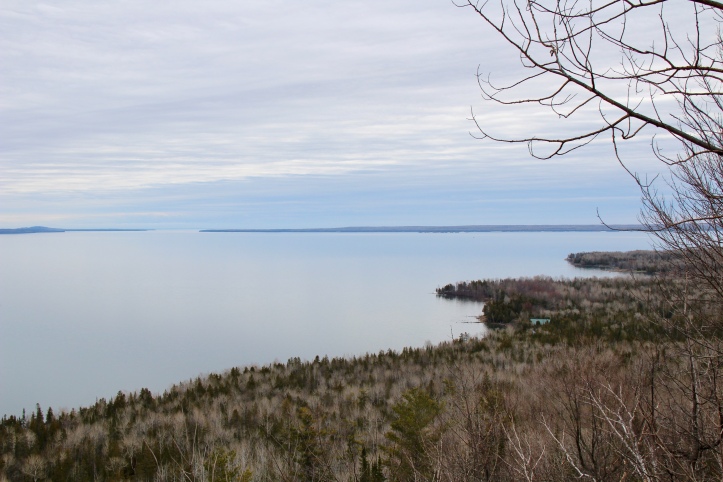 obviously out of season the place seems deserted and neglected,

even the poor cows were feeding on hay in deep muddy fields. The melting snow had left much of the land waterlogged. The only life we saw was when we eventually found a coffee shop open, and as we drank our coffee a constant flow of locals entered, shared banter, and left with their coffee and cakes to go.

for a stroll along the Boardwalk and dunes,

the bitter cold wind brought the icy rain down so we decided to call it a day!