Whilst the sun was not quite shining as we made an early start today, the sky’s were bright and the air dry.

Stopping only briefly by the roadside to take a picture of a waterfall we missed yesterday because of the rain before we joined the snaking queue of cars heading to the Fairy Pools.

We could see clearly from the car park (yes there was one today so no worrying about leaving no the car at the roadside!) the route we would be taking to view the fairy pools.

We made our way along the rocky and often muddy pathway towards the river along which the waterfalls and rock formations formed the ‘pools’.

There were numerous stepping stones to cross the many streams coming down from the mountains, some more difficult to cross than others.

The colours of the grass, heather and bracken which was turning varying shades of orange and rust in the autumn light were bright and colourful.

The waterfalls were mystical and beautiful they tumbled over the rocks,

forming pools in the gouged out rocks (for the fairy’s to swim).

There were an increasing number of people about as we progressed along the river, some experienced walkers who were polite and considerate to others, then there were the tour groups who barged through as though they had preference to the ground they walked, and then there were those tourists, you recognise them, designers shoes which are totally inappropriate for the muddy ground, racing through everyone, not waiting for others to pass just intent on the next selfie!!

Today was another day we managed our 10,000 steps before midday so we felt we could reward ourselves at the Kishorn Seafood Bar.

We pushed the boat out at this delightful, small but perfectly formed restaurant. Local langoustines, scallops and lobster. 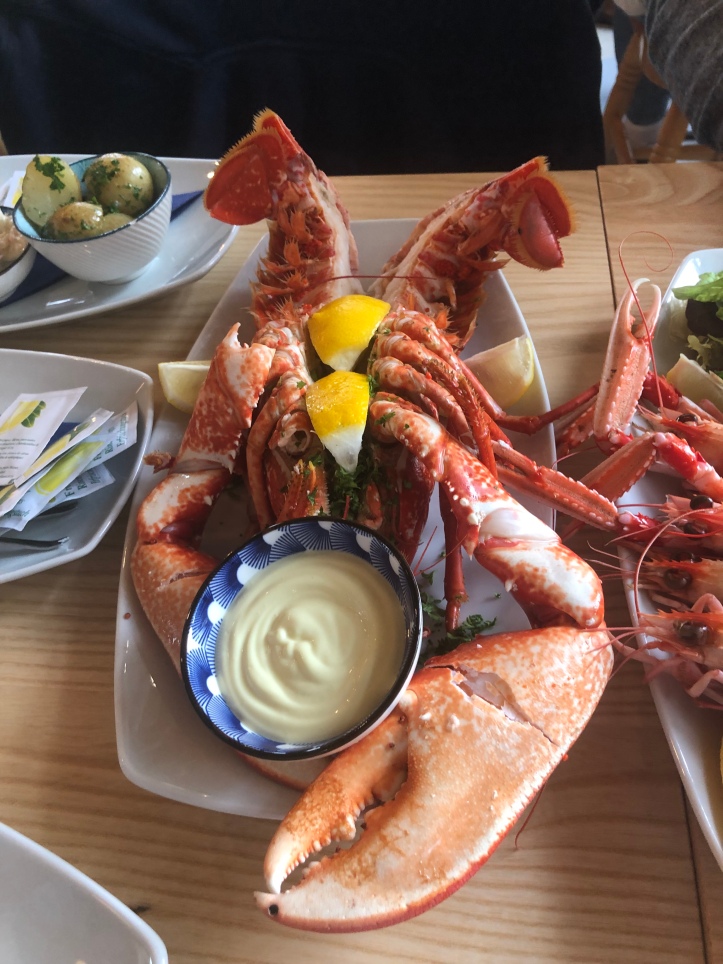 All delicious but rather overpriced for the small portions we were served.

We drove over the mountains on the road known as Bealach Na Ba Pass (pass of the cow or cattle).

hairpin bends, points where the road seemed to disappear infront of us…. and views to die for. A busy road in both directions fortunately there were plenty of passing places for cars to pass each other.

Unlike the quiet lunch, dinner at our quaint hotel on the lochside at Applecross was lively, noisy, atmospheric, friendly with a huge menu written on the wall the choose from a wide variety of local produce. The food was excellent we all agreed, and the portions good sized and reasonably priced!