After a slow start to the day we set off to our home for the next two weeks, MS Nile Vision. Unsure what to expect as this cruise is usually exclusive to German overseas visitors, but we managed to book a room on what has been on the bucket list for a while. For some reason the cruise, known as ‘the long cruise’, as opposed to the traditional 4/5 day one between Luxor and Aswan has not run for a number of years. Fortunately they have restarted but there are only a couple of boats doing it, the Movenpick boat quotation was ridiculously expensive and demanded payment in dollars, hence our taking a chance on being outnumbered by German tourists.

As we drove along the original ring road of Saleh Salem it was interesting to note the many changes happening even though its only six months since we were last here. Lots of road works and more bridges being built, as we neared Maadi I’m sure the road has been moved as its now close to the lake of Birkett el Fiel which used to be obscured from the road, and houses and building seem to have been demolished.

Arriving well before any others guests we had the boat to ourselves to explore and relax whilst being well attended to by the welcoming staff. It’s not a modern boat but in keeping with the tour we are to do. Taking about 100 guests there is plenty of space for everyone.

Sitting on the sun deck relaxing in the cool breeze I was delighted at the beautiful sunset.

Too soon it was time for dinner, we had the dining room to ourselves until another couple came in towards the end of our meal, a real weird feeling with so many attentive staff waiting on the table, each course coming rapidly as we finish one another was put on the table. The usual is for open buffet but I guess that just wouldn’t work for two couples, it did however give us chance to get to know the staff, think they were delighted to be able to speak in arabic!

Our travelling companions arrived noisily as we were heading to bed for the day.

Deciding that we have paid for the excursions as a full package we would take the tour of the pyramids and museum with a private guide. Bit of a novelty for us but hey, why not! So we had a minibus to ourselves and explained to the guide that we would like to see the Sun Boat museum as we are familiar with the pyramids.

He was fine with this and adjusted his role according to what we required. As we drove along the ring road, we could not believe the amount of unregulated building on fertile land. No structure and buildings so close to shake hands from the windows.

The new Grand Egyptian Museum as we passed has developed and looks like it will be quite something when it is eventually completed, they say end of next year, but we won’t hold our breath!

The drive up the hill to the plateau after the police checkpoint was a building site and rubbish everywhere. I couldn’t believe how poor the approach to such a world important site. Once past the ticket offices and security no matter how many times I have visited the sheer scale of the pyramids is still amazing.

In the past as soon as you put your foot in the area the trinket sellers would surround you to buy their wares. This is off putting to some, a nuisance to some, an annoyance to others. Today however there were only one or two and only half hearted pleas to buy. It seems the recent laws passed to fine aggressive touts is working.

Even the camel drivers have backed off, didn’t even get one offering us a ride!

This makes it a much more pleasant experience.

The Sun Boat Museum at the side of the great pyramid where you can now buy your separate entry ticket, was fascinating.

Discovered 65 years ago and restored over years it’s quite incredible to comprehend the age of the boat and the location it was found and excavated from. 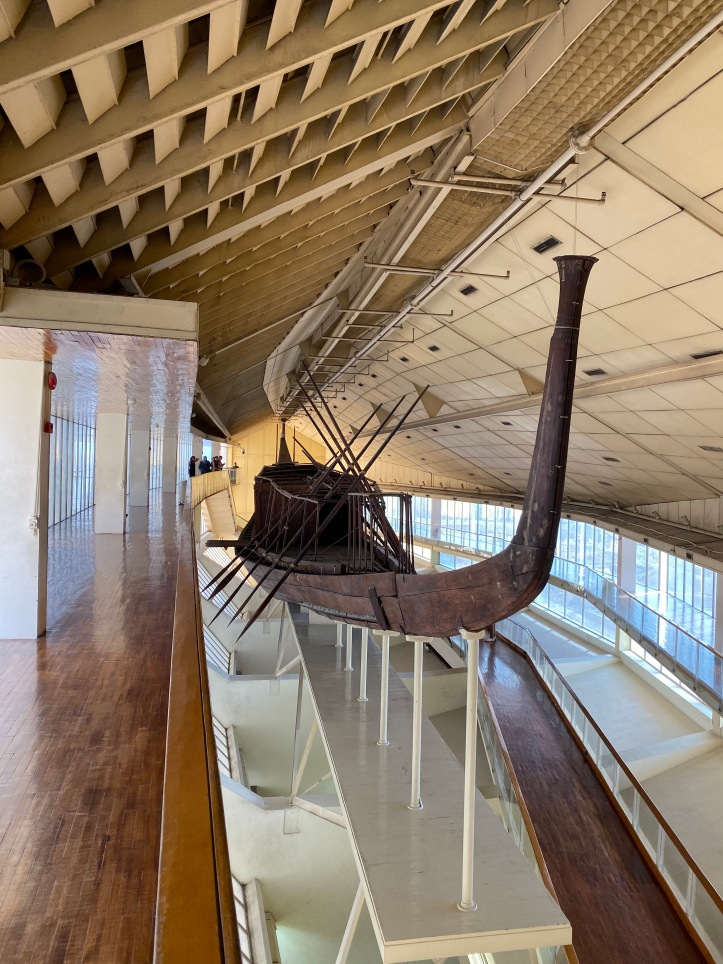 A second boat is currently being restored by a joint Japanese project and is being moved to the new Grand Egyptian Museum.

Moving towards the second pyramid the number of horse and carriages was incredible, dashing around up and down the road to the Sphinx, just as bad as trying to cross the road from cars!

After the obligatory photo from the panorama view 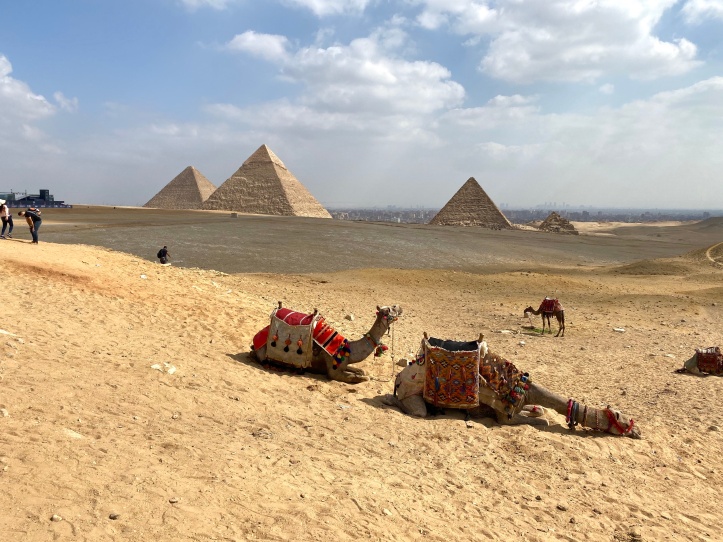 with husband moaning that ‘you have the same picture a thousand times!’ we headed to the Egyptian Museum.

Here the guide focused his attention on things that we would not have noted ourselves, which was very interesting. Even so by the time we left we were getting spaced out with the amount of information he was giving us! One of the reasons for wanting to visit the museum at this time was to see how it looks considering the movement of artefacts to the GEM. Last time we were here it was difficult to negotiate as the place was full of packing crates in various stages of completion, this time it was much more organised, yes there are still areas with packing crates but in a much more orderly fashion. There has obviously been movement of some of Tutankhamen items but there are still plenty to see. This year the use of camera phones has been allowed free of charge, although the charges for using a camera remain. I was too interested looking and listening to be bothered to take my phone out and battle the tour groups pushing and shoving for their selfies! Of course there are still some who want to circumvent the rules of no photo in the Tutankhamen room, and seem aggrieved when shouted at repeatedly that there is ‘no photo’, and even more so when the picture was then deleted by the attendant!

Returning to the boat, sitting on the sun deck in the cooling breeze, so relaxing I think we can cope with this for a couple of weeks without difficulty.